On-Campus Strategies (Promising But Little or Mixed Evidence of Effectiveness) 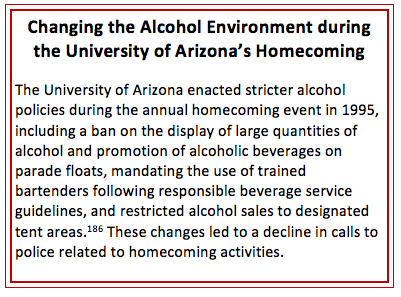 Alcohol marketing exposure (e.g., seeing alcohol advertisements or marketing materials) is associated with increased alcohol use among young people.187 To this end, restricting alcohol marketing on college campuses might lead to reductions in drinking and related harms among college students and surrounding communities.

One study examined the effects of bar-sponsored alcohol promotions by designing false advertisements, similar to those that would appear in the campus newspaper. Based on these newspaper ads shown to students in a lab setting, students reported expectations of drinking greater quantities when they saw cheaper alcoholic beverages promoted.188 However, very few studies have assessed the effects of alcohol marketing restrictions on campus. More research is available in the off-campus strategies section on restricting alcohol marketing.

Policies against having open alcoholic beverages are often associated with banning alcohol use in specific places and events. It further enforces the lack of social tolerance for intoxication and provides greater opportunities for law enforcement to intervene.189

Mass media campaigns are “designed to change student knowledge, attitudes, and behavior” in order to promote social good.191 Media campaigns have frequently been implemented to try to reduce alcohol-impaired driving among college students. They are designed to be persuasive, encouraging people to avoid drinking and driving by instilling feelings of irresponsibility and fear of getting caught.192

As part of a multi-strategy intervention to prevent alcohol-impaired driving, a mass media campaign was implemented on a college campus in the southwest (along with a social marketing campaign and sobriety checkpoints). The campaign consisted of news coverage at the roadside checkpoints and stories placed in the school newspaper to increase students’ perceived certainty of apprehension. After the campaign, there was a reduction in drinking and driving193; however, it is not possible from the study design to separate the effects of the mass media campaign from the impact of the other intervention components to reduce drinking-driving.

If mass media campaigns are used on college campuses to reduce alcohol-impaired driving, they should be designed with the intention of creating a general environment supportive of enhanced enforcement of alcohol-impaired driving deterrence measures,194 and to increase students’ perceptions that they will be likely to be apprehended if they drink and drive.171 For more discussion of mass media campaigns, see the off-campus strategies.