There are two process-oriented strategies recommended in ‘A Guide to Best Practices: Second Edition’ focused on creating and maintaining campus-community coalitions to build relationships with key stakeholders in the community who have a shared goal to reduce student alcohol use and related problems and to develop and implement a strategic plan toward this shared goal.

Learn the theory behind these strategies, the evidence of effectiveness and tips for implementation below.

Build and Maintain a Campus-community Coalition or Working Group

Building a campus-based working group or task force can be an effective way for schools to build relationships around shared goals related to reducing student alcohol use and related problems. As these groups become established, they can serve as a central information “node” on campus—that is, they can receive and disseminate information about the problem and thereby create a shared understanding of the factors in both the school and surrounding environment that might promote excessive or high-risk drinking. Working groups need to involve leaders from the broad range of on-campus constituencies: administrators, faculty, students, health services, law enforcement, and so on.

This is only the beginning of building an effective approach. The next and critical step is either to build the working group into, or combine it with, a broad-based community coalition. In order to address the alcohol problems facing universities, it is important to understand that the culture of the community surrounding the campus influences the problems both on and off university grounds. Thus, university members must work in tandem with community members to reduce excessive drinking and related problems.

One study of more than 700 college administrators found that while many schools have an alcohol specialist or task force, very few work with the community to reduce alcohol use by their students.8 By establishing a “town-gown” coalition, the issues of alcohol use that are pervasive on campuses and in communities can be more fully addressed. The Community Anti-Drug Coalitions of America recognize the need for collaboration in their definition of coalitions: “a formal arrangement for collaboration among individuals, groups, or sectors of a community, in which each group retains its identity and all agree to work together toward the common goal of a safe, healthy, and drug-free community.”9

Research has shown that coalitions can be a strong and effective way for communities to address local challenges, including alcohol use.10-12 There have been a number of studies that have shown the efficacy of using community coalitions or campus-community coalitions to reduce high-risk drinking, including engaging the college campuses in these efforts.

The strongest evidence in favor of this approach to reduce college drinking comes from projects that have used experimental and comparison schools and communities to document change. Communities Mobilizing for Change on Alcohol used a community organizing approach to reduce alcohol use by 18- to 20-year-olds, arrests and alcohol-related traffic crashes, and illegal sales of alcohol to minors in bars and restaurants.10,13 Coalitions were used as the vehicle to create change and were vital to the success of the intervention.

A recent example of this approach is the Study to Prevent Alcohol Related Consequences (SPARC), a randomized community trial that worked to reduce high-risk drinking among college students.14 SPARC employed a campus-community organizer who worked directly with both campus and community members to implement a range of strategies—many of which are described in these pages—to reduce high-risk drinking. Each campus-community coalition undertook five steps to address excessive drinking: (1) conduct an assessment, (2) build the coalition and its capacity, (3) develop a strategic plan, (4) implement an action plan, and (5) sustain efforts.

As a result of the SPARC intervention, an average of 228 fewer students in each intervention school experienced one or more severe consequences due to their own drinking during the past 30 days, including getting into trouble with police.11 These successes were the product of strong coalitions made up of both campus members (alcohol specialists, students, administrators) and community members (parents, the faith community, law enforcement, business, and more). This broad representation was necessary in order to implement effectively the wide range of evidence-based strategies used to address the high rates of alcohol use in these institutions and communities.

In the SPARC, the universities were primarily responsible for guiding the overall coalition process by providing oversight and support and demonstrating a strong commitment to the campus-community coalition approach. Often, the community organizer position was undertaken by university employee, which strengthened the role of the university in this process. However, it is also important to recognize that the university was only one half of the equation, and the role of the community cannot be minimized. This process showed the positive effects described above and should be used as a model for future campus-community coalition interventions.

The Robert Wood Johnson Foundation’s A Matter of Degree (AMOD) project produced another scientific evaluation of efforts to reduce excessive drinking and related problems on college campuses.12,15 With ten experimental and 32 comparison schools, the project emphasized community mobilization and environmental strategies (outlined in the second portion of this Guide). The project resulted in significant declines in alcohol use, alcohol-related harms, and secondhand effects of alcohol, in addition to reductions in driving after drinking, driving after five or more drinks, and riding with a high or drunk driver in the experimental sites, with the largest effects occurring in the sites with the highest levels of program implementation and the greatest use of environmental strategies.

A specific example of the AMOD evaluation can be seen in the University of Nebraska-Lincoln’s (UNL) NU Directions Coalition.16 NU Directions was established among top city and campus officials, students, community members, law enforcement, and public health/medical officials. The coalition developed a strategic plan targeting individual, campus, and community factors related to high-risk drinking. Some of the initiatives of the coalition included eliminating alcohol use in Greek housing in order to maintain housing status, social marketing campaigns aimed at first-year students and high-risk populations, a web-based alcohol server training program, and implementation of interventions for high-risk/sanctioned students (e.g., Alcohol Skills Training Program, BASICS, and eCHUG).

Data from the AMOD evaluation indicated that the percentage of UNL students who binge drank during the past two weeks decreased from 63% in 1997 to 47% in 2003.16 Student self-reports of alcohol-related problems (e.g., experiencing hangovers or blackouts, missing a class or getting behind in schoolwork, doing something they regretted, or arguing with friends) also declined.

Another significant focus of the NU Directions Coalition was increasing enforcement, including consistency of enforcement on campus and in the community. Efforts were made to implement and maintain campus policies around “no-alcohol,” especially in residences (campus and Greek) and at tailgate parties. It was found that citations by campus police for liquor violations increased from 54 to 64 (1998 and 2000 respectively); however, after the hiring of a new police chief who also became a coalition member, citations increased to 253 in 2002-2003. There were also increases in citations and sanctions to fraternities as a result of increased campus alcohol enforcement.16

A similar coalition at the University of Massachusetts Amherst implemented a social norms marketing campaign designed to correct misperceptions about alcohol use, an evidence-based program for mandated students (BASICS), a mandatory online alcohol education course for incoming students along with penalties for non-completion, and a revision of campus residence hall policies and town bylaws to prohibit open containers of alcohol and require keg registrations.17 The number of citations on campus for underage alcohol possession increased from 71 citations in 2003 to 421 in 2009, and the number of students mandated to complete an intervention following an alcohol-related offense went from 650 during the 2004-2005 academic year to 1,149 in 2008-2009. From student surveys, the prevalence of binge drinking decreased from 63.7% in 2005 to 58.1% in 2009.

A working group or task force takes a high degree of commitment and time for the individuals involved. At the start, a commitment should be made toward recognizing the complexity of the problem of college student drinking, using evidence-based approaches, and evaluating the impact of the group’s activities. Setting short-term, achievable, and measurable goals is essential, and seeing progress toward those goals can help sustain the group’s enthusiasm and momentum. A successful coalition will engage strong senior leadership and goal-oriented members representing a wide variety of campus “voices” as well as key decision-makers, opinion leaders, and other stakeholders from the surrounding community. Successful efforts combine goal-oriented planning, evidence-based implementation, and inclusive campus and community coalition-building to build and maintain commitment to the coalition’s work over time. 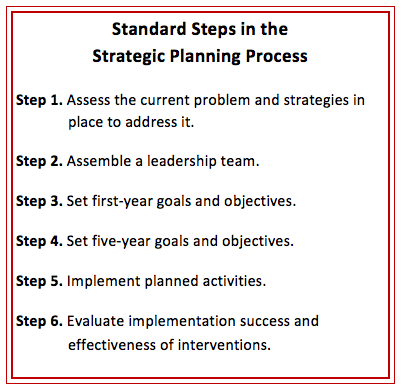 College leadership can work with community stakeholders to develop a strategic plan for their school and community to address underage and excessive drinking. The plan can include methods for assessing the nature and extent of the problem, identifying quantifiable ways of tracking success, and understanding current approaches and policies to address the problem, as well as plans for allocating resources in the short- and long-term to change the culture of drinking on campus. Additionally, the strategic plan should include sustainable and continuous program and outcome evaluation to ensure that progress toward goals is being measured.

Strategic plans are best developed initially from the input of a small intensive working group which then circulates written drafts for feedback and comments from a wider set of stakeholders. Plans should be re-visited at least annually to monitor progress toward goals.When deciding which interventions you should implement on your campus, you want to consider what the impact of your strategies will be. There are two main factors to consider when thinking about impact: the effectiveness of the intervention and the reach of the intervention. These factors will be discussed in more detail for each strategy presented here but should be considered in each step as you move forward.