Minimal research exists on the effectiveness of CAPs generally, and the same is true for the majority of CAPs in use by Maryland Collaborative member campuses. To expand the knowledge base regarding CAPs, Maryland Collaborative staff identified existing taxonomies of college alcohol policies and developed a method for assessing CAPs effectiveness.

Each school’s CAPs was collected in April 2022 via a Google search including the school name and the term “alcohol policy.” We followed up with specific search words as needed “e.g., related to Greek life) until we located the most recent and complete policy documents. All data are current as of May 1, 2022.
Each policy was then assessed based on four distinct factors: 1) accessibility, 2) clarity, 3) effectiveness, and 4) consequences for policy violations.

The accessibility measure addresses the extent to which policy information is dispersed across several documents or web pages. Two independent reviewers assessed CAPs accessibility, searching for member schools’ CAPs on their respective website.

We measured clarity using the Flesch readability score from Microsoft Word, which assesses sentence length and number of syllables per word. Flesch scores range from 0 to 100, with higher scores indicating greater text clarity: for example, a score of 60-70 designates “standard” or “plain” English; a score of 30-50 is considered difficult, confusing, and best understood by those with some college education; and a score below 30 indicates the text is very difficult and best understood by college graduates. The “21 Model Campus Alcohol Policies” fact sheet provides clear language for 21 common campus alcohol policies (Appendix B).

Expert Panel Methodology: The 30 Policy Elements – Expert panel methodology is used to provide expert guidance in research areas where data are incomplete, imprecise, or controversial. We employed a panel of five alcohol policy experts who evaluated the 30 specific policy elements for their effectiveness at preventing excessive alcohol consumption among the general college student population. The panel of experts compiled the 30 policy elements from various sources including the Maryland Collaborative colleges’ existing policies.

Of note, in this analysis, we analyzed policy elements according to their effectiveness, not their efficacy. The question posed to panel of experts was, “Were this policy fully implemented and fully enforced, what would its maximum level of effectiveness be?” Recognizing that varying levels of implementation may accompany even ideal policy language, we asked panelists to disregard the impact that potential variation in policy implementation may have on policy effectiveness in the interest of conducting the panel expediently.

These seven strategies have been moved into the Most Effective category to reflect this perspective. A high level of consensus was reached on the ratings for all other policy elements.

Federally Mandated Policy Elements – In addition to state- and community-wide policy elements, colleges and universities are federally required to have their own set of CAPs. In order to receive federal funds, an institution of higher education must at minimum fulfill five policy requirements as established by the Education Department General Administrative Regulations (EDGAR); Part 86 of the federal Drug-Free Schools and Campuses Act lists these requirements. EDGAR requires colleges to provide students with a written policy that: (1) bans unlawful possession and use of alcohol; (2) states applicable local, state, and federal laws; (3) describes the health risks associated with alcohol use; (4) cites any available campus alcohol counseling/ treatment programs; and (5) clearly enumerates the sanctions to be imposed in instances of policy violation.4

We used the same rating methodology to evaluate the effectiveness of consequences for violating CAPs. We gathered these consequences, often termed “sanctions” in the colleges’ alcohol policies, from each college’s CAPs. We classified consequences as Most Effective, Somewhat Effective, Ineffective, or Not Scored and a CAP’s consequences score was calculated through the same process as described above. We evaluated a total of 13 sanctions in 2016. At that time we determined that two of these sanctions – warning and alcohol education – were ineffective; we did not include them in our 2022 policy reports.

Deterrence is critical to effective enforcement of environmental policies and rests on the perception that violations will incur swift, certain, and sufficiently severe sanctions. It should be noted that policies are not effective if there is no certainty that they will be enforced. Certainty of consequences has been shown to be the most relevant and effective factor in deterring behaviors that warrant sanctions, especially among college students.5,6 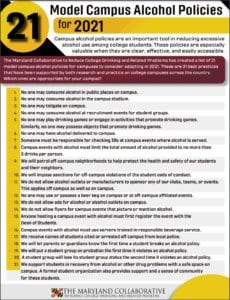 This report has numerous limitations. Although we developed the instrument to evaluate CAPs to maximize the objectivity of policy reviewer assessment, it is impossible to completely remove the effects of rater subjectivity. Additionally, although the policy measures and sanctions included in this instrument are a fair representation of the most commonly used policies and best practices available, they are not exhaustive. Further, other policy measures not currently included in this instrument may be contextually more or less appropriate depending on the campus. Finally, the panel of experts made their determinations about the effectiveness of policy measures/sanctions – not about the real-world efficacy of those measures or sanctions. Efficacy relies on the extent to which policy measures are implemented and enforced on a campus, which may warrant further research. However, the addition of ratings by Advisory Board practitioners does provide the perspective of key implementers of policy measures on campus that have a first-hand look at what has been successful.