This section of the Guide describes evidence-based policies and interventions that can be implemented on campus based on abundant evidence of effectiveness as reported in the literature.

Strategy: Prohibit Alcohol Use on Campus

College administrators can choose to have “dry” campuses, i.e., prohibiting the use of alcohol anywhere on campus, regardless of age. This strategy decreases alcohol availability, which can subsequently reduce alcohol use and related problems among college students.175,176

Also, students at “dry” schools reported experiencing fewer adverse secondhand effects of drinking, such as being assaulted, having their property damaged, or experiencing unwanted sexual advances.177 Similarly, another study found that a “dry” campus was associated with a reduction in drinking, particularly among females.178

However, campus-wide bans might not solve the problem of students coming to school with existing heavy drinking problems. While fewer students drank, if students drank at the “dry” schools, they still engaged in excessive drinking and experienced alcohol-related problems at rates similar to drinkers at non-“dry” schools.177 Generally, schools had more success reducing moderate drinking than heavy drinking through use of a campus-wide ban on alcohol use.177

One of the great lessons of national Prohibition in the U.S. is that alcohol policies cannot go too far beyond what the population is willing to support. College administrators wishing to implement a campus-wide ban will need to form partnerships with student health center staff, student affairs staff, student organizations, law enforcement, alumni organizations, faculty, and staff—in short, the many diverse constituencies that make up a campus community—and generate broad, community-wide agreement if the ban is to be effectively implemented and enforced.

Alcohol use can be banned in specific places or events on campus to reduce the physical availability of alcohol. This strategy is a viable alternative for college administrators who do not want to prohibit alcohol entirely on campus.

Findings from a large national survey suggest that more than 80% of the general public support restrictions of alcohol use in specific places or events181 and college administrators have a critical role in implementing such restrictions. Substance-free housing appears to be a popular option; the majority of schools do offer substance-free housing.179 Administrators should work to form partnerships with local public interest groups, campus and city police departments, student health center staff, and student affairs staff to gain support for this approach. Greater enforcement of established drinking rules makes a difference; it is associated with a decrease in alcohol-related violations.182 Enforcement, in turn, is much easier if residences are substance-free. 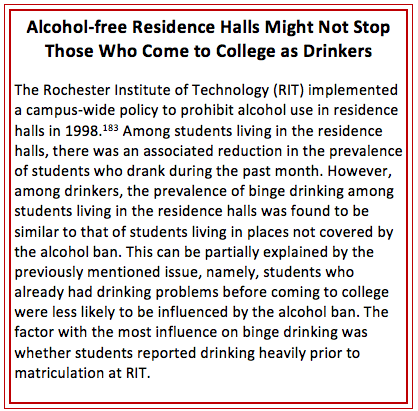 The sale of alcohol can be banned at specific places or events on campus as a means to reduce the physical availability of alcohol. College administrators might choose to implement these bans instead of banning alcohol sales campus-wide. Schools commonly ban sales of alcohol at sporting events8 but sales can also be prohibited at on-campus social events, such as concerts and festivals.

At the University of Colorado in Boulder, the administration restricted the sale of beer in the stadium and banned alcohol use in the stadium starting in the fall of 1996 as a two-year moratorium.184 A subsequent evaluation by the university found that numbers of ejections from the stadium, assaults, arrests, and referrals of students to the university’s judicial affairs process all dropped substantially compared with the year prior to the ban. The chancellor of the University of Colorado made the ban permanent following the success of the moratorium. There was not a significant reduction in the number of spectators following the ban on alcohol sales and use. Administrators worked closely with the police department to enforce the ban.184

Beyond the evidence cited here for residence halls and sporting events, there is little evidence available on the effects of banning alcohol sales or use at specific places or events on campus. 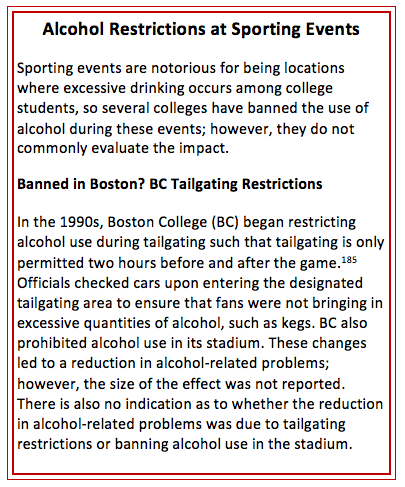